When setting up a new PPC account, deciding on your Google Ads account structure is a key decision. In many ways it can be relatively easy to get a campaign up and running, but if time hasn’t been spent planning and structuring the account, it can lead to big problems later down the line.

Get the structure wrong, and you’ll find that Google Ads can get very confusing, very quickly!

At the top level, a Google Ads account is organised across three sections: 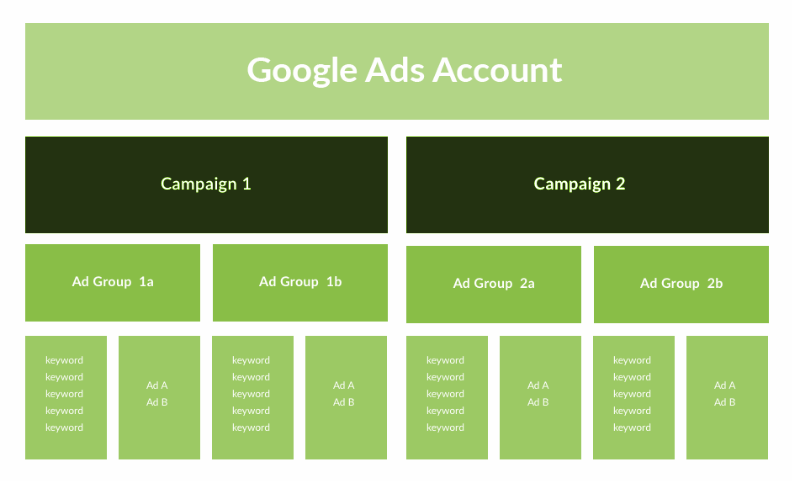 In this post, I’ll explain the thought process in planning a successful Google Ads campaign. Following the steps in this post will set you up for long term Google Ads success.

The main unit you’ll work on inside your Google Ads account is actually the ad group, rather than the campaign. An ad group sits inside a campaign and pairs together keywords (or other targeting criteria) with ads. Effectively you’re saying to Google: when people search for these terms, I want to show these ads. 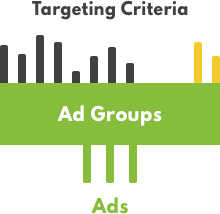 How Many Ad Groups Do You Need?

The rule of thumb when adding new keywords to an ad group is to ask: would you want to display a different ad for that term? If you do, and even if you only made small changes to the ad text, the new keyword should to go in its own ad group.

In most situations there is no practical limit to the number of ad groups you can create within a campaign. The actual limit is 20,000 ad groups per campaign, so you have plenty of space! 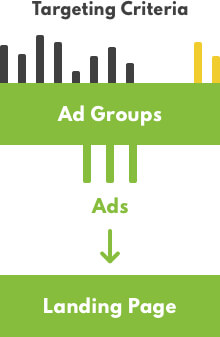 Most of the time, each of your ads in an ad group will link to a single page on your website. But it’s worth knowing that different ads can link to different pages, as long as they all point to the same domain.

Imagine for a moment that you ran a carpet cleaning business. You could create a landing page for each ad where the page continues the conversation started by the ad.

Very few advertisers go to those lengths to achieve synergy between ad and landing page.

So How Many Campaigns Do You Need?

The ad group you’re creating sits within a campaign. The campaign settings dictate what location you are targeting, as well as language, bidding strategy (automatic vs manual), ad schedule, and overall budget. You only need to create a new campaign if you want to change any of these settings.

For example if you want to target a different location, or run a completely different set of ads in the evening, then you’ll need a new campaign. 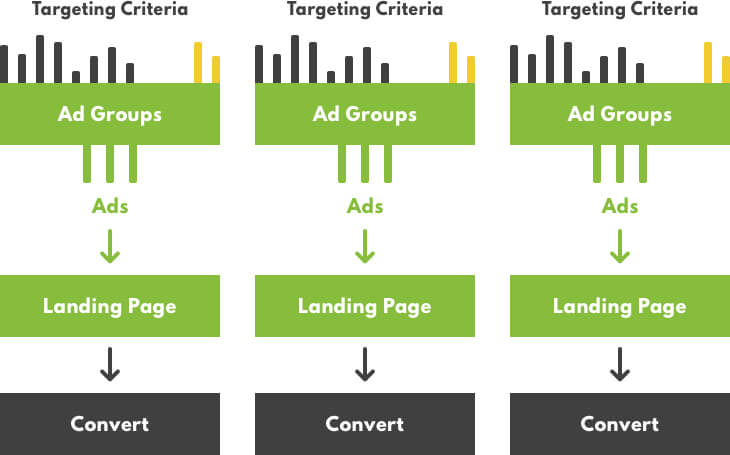 For example, you might start off with a campaign targeting both England and Scotland. If you find that Scottish customers are more concerned about price, then you’ll need to split the campaign into two in order to write different ads with an increased price focus for the Scottish audience. If conversions cost less in Scotland, you might also allocate your budget differently between England and Scotland, which would be another reason to create multiple campaigns.

It’s important not to get carried away creating lots of campaigns. If you just want to bid differently in different locations or at different times, you can apply a bid modifier rather than creating a new campaign. So don’t create a separate campaign if you just want to adjust your bids.

If you want to bid differently, you can do that from a single campaign.

You’ll probably start off with a small number of campaigns, with a relatively high number of ad groups (say 15-20) within those campaigns. Over time your campaign structure will get more granular as you split new keywords off into their own ad groups, in order to serve a dedicated ad to those keywords.

As you build up data in your account, you’ll spot additional keywords you didn’t think of in your initial planning. Often these new keywords will go into their own ad groups.

Remember the rule of thumb: if you would change the ad text in any way, the new keyword belongs in its own ad group. Most of the time you’ll end up with no more than a small handful of keywords in each ad group.

It’s a lot of work to structure your account in a granular way like this, especially in the beginning. But the work is worth it, and the long term rewards are worthwhile.

By adopting a granular account structure with a large number of ad groups per campaign, you’ll serve highly relevant ads for each search query you’re bidding on. More importantly, you’ll be able to see with laser focus which keywords and ads are performing, and which aren’t – meaning you can be more effective with your overall spend in the long run. Being more relevant than your competitors is the way to succeed at Google Ads.

If you need to improve the performance of your PPC campaigns, why not take our free PPC Audit?

Rob is an expert in Google Ads, copywriting, and marketing automation. He’s also an author of three books on marketing and a part-time podcaster.